At various times last night I caught bits and pieces, snippets really, of the BBC's Comic Relief broadcast. As someone who has written comedy, satire, parody and other supposedly funny stuff, I often prove hard to please. Like many others and their individual taste in art, I know what I like, I know what makes me laugh, I know who are the masters of comedy and why. Below is Ken Dodd - One of the my Heroes of British Comedy: He knows all the rules and formulas but specifically knows how to use or break each one or all for maximum titterlarious effect. The man is a legend and a hard working life-time comedy connoisseur. 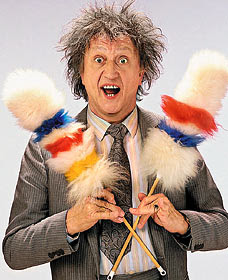 ( image found on the daily mail site @ http://img.dailymail.co.uk/i/pix/2007/12_03/doddDM2312_228x280.jpg )
When lesser (much lesser then Ken) comedians and their comedy becomes formulaic, I'm mentally beyond the upcoming punchline usually figuring the mnemonic linkages while most of these standard comics are still exposing a set up to Joe Public. Its a game I play, Guess where the joker is going after the punchline.


In Ireland we have a comedian called Jason (Burn him, Burn him) Byrne as maybe living proof that determination and ambition can triumph over (utter lack of) talent, quite simply one of thee most unfunny people on the planet, even if he tries his best to 'look funny, say stupid things that might be funny if actually thought out, He also acts outrageously, over and over and over again - he laughs and laughs and guffaws and laughs and seems to believe being silly can be like a forest fire, drilling that friction of his unfunny laughter into audiences heads, over and over and over again, will somehow eventually catch a spark of laughter in one clone - like thicko Audience head, thereafter sparking a wider reaction in Burn's audience. His attempts to do this are beyond any cringe comedy ever offered by the office or the superbad crew, particlularly when it it actually works for him. 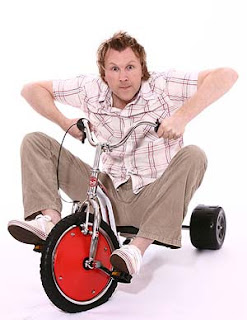 While there is a place for burn him burn him's (lack of) style of unsophisticated humor, his cringing ginger simpleton perosna tries to be funny without recourse to any other formulas, superficially cajoling his audience with his repetitiously rebellious analytical antipathy, all of which is terrific if you are an inherently funny person with a natural ability to make people laugh, which he isn't and he hasn't.
But many naturally gifted people do eventually end up investigating the cause / theory behind their own humor successes, particularly if their 'stage character' impinges upon their off-stage personality in some regard. Some invariably end up back at the classics, P.G. Woodhouse, Aristophanes, Groucho, Vaudville, Music Hall, etc, where they can discover century and millenial old comedic tricks. Pity Burn didn't take the time to try to figure out another strategy to be funny, like in his particular case, maybe just pay someone to write some funny material for him.
Little Britain of course is held in high regard in the UK, as is Catherine Tate, you would need to be very high indeed to find last night's intersecting character comedy funny. As stated and repeated above, while repetition is a recognized comedic device and Jason (Burn Him Burn Him) is a blatant example of singular overuse due in part to his (to quote George Bush) misunderestimation of the power of repetition and Unicomedy to also irritate as well as entertain.

Williams and Tate were the archetypal 'comedy stars' last night, but overly formulaic and ultimately equally as flat and unfunny as Burn Him Burn Him. Burn Him Burn Him is certainly No Dylan Moran, Dara O Brien, Eddie Izzard or the very talented Mr. Jimmy Carr - those guys simply don't do unicomedy - while working hard at it all daily, they also meticulously research and learn the various aspects of their trade. So Burn Him Burn Him may end up traveling that Jim Eoin Unicomedy route of 'fooking no where talentless twat' pioneered by the once funny Roy(ston) Chubby Brown. ( FYI: That once was on tuesday april 15th 1986, 4 33pm for approximately fifteen seconds)
Tate and Williams reside at the opposite side of the scale from Burn Him Burn Him & his unfunny Co, instinct once central to their success, has been usurped by over reliance on a previously proved array of formula. Faced with the last nights reality of a national requirement to perform and be funny, they should have forgetten about doing a Hancock, and take the same advice I've given Burn Him, Burn Him, above - Yes they too should just get some freshly talented writers in, give your comedy some legs Lurvy, spread that lurve, and the paydays too folks. Old puns about greedy Bankers have already entered reality.
All of which brings me to the reality of Comedy actually Traveling, three Cheers for the American office, south park, Frazier, Curb, Seinfeld, even, Jackie Glesson, Bilko, but more recently 'the big bang theory, Scrubs, Boston Legal, Etc, Which is truly great but I'm still expecting to see Simon Cowell turn up as head panelist on an American version of Dead Donkeys Dancing on Millionaire Ice or something, I'm wondering what happens when they eventually take British TV format formulas and cross fertilize them with formulaic American comedy - and then I came upon this image of this lady.... 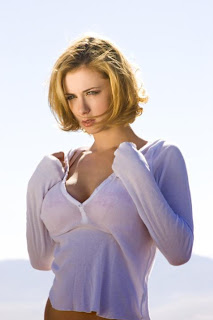 That's Iliza Shlesinger's above and her slightly sultry and very different take on the Ken Dodd or the Burn Him Burn Him comedy look, and I must say it's somewhat reminiscent of a one time Tea Leoni pose I can't seem to find to hand, ( i.e. she one time wife of an X-files sex addict called DD ??) Oh Okay this, legs in air reversed, one will just have to do you for now: 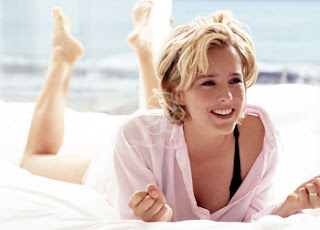 Tea (Leoni) for two Mr Woodhouse ?
Iliza does remind me, in terms of her actual delivery, of one Sarah Silverman, she who, despite her USA success (with a little help from Matt Damon) so miserably failed as a comedian in Britain, Her choice of material was so wrong, so... her attitude was wrong... just too 'American' for the British really. It will be interesting to see where Shlesinger goes with her career, whether her ego will do a Burn Him Burn Him or she travels the true route of comedy connoisseur.
Posted by Unknown at 12:49 PM