A PhD in April, Should I show them this clip before or after I start, LOL:

Posted by Unknown at 9:52 AM No comments:

Think I'll give the INTERNET thing a rest for a while.
Posted by Unknown at 3:24 PM No comments:

1.7 Billion Euro Worth of Irish Imagination - My Hole

I was recently fascinated by the clever and humorous work of artist Christoph Niemann showcased over on the New York Times website. Basically images of various lego bricks, with superimposed text added, created using a lot of his imagination. The image below is just one of them, you should check out the rest. 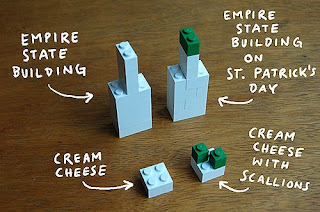 Lego was in someway responsible for my own fascinations with creativity, the image above reminded me that it was the one toy that I continually played with. Well it was my only toy really, apart from the environment as a whole, (or should that be spelled hole ?) which when you are an imaginative kid is almost the equivalent of all the toyshops in the world rolled into one big one that stings, bites and hurts as it teaches you things.

The cheese and the green and NYC ESB in the image above reminded me of the annual exodus from Ireland of every level of public representative that can grab a seat on an air fungus flight, usually splitting under the guise of ambassadorial role or cultural smackhead or some such bald ox that conveniently gets classified as expenses, any excuse to get out of the cold and as far away from the metaphorical heat for a while.

There has been literally no imagination shown on behalf of the government in relation to the Irish Bank systems difficulties in the credit crunch, credit crisis and now recession.

Apparently the best we can come up with is to throw another 7 Billion Euro into those holes in an effort to fill them up, the trouble of course is; none of the banks have stipulated exactly how deep their own individual holes are, and indeed when the government decides to use taxpayers money to fill the hole, it actually their hole actually becomes my hole. How can these people in all conscience call this a remedy, what ever happened to the idea of creative problem solving ?

Proud to be Irish ? absolutely, Proud to be in anyway associated with the horde of dullards soon to be flying all over the world, allegedly on my behalf - Hell No.
Posted by Unknown at 4:41 PM No comments:

A little bit of complex creativity

I recently finished reading M.Mitchell Waldrop's 'Complexity - the emerging science at the edge of order and chaos' which obviously isn't a book that I'd try to condense into a short and somewhat impulsive blog post like this.
Yet just as, for many years now, Physicists have been fascinated by James Joyce's Ulysses, particularly quantum physicists, other writers, digital writers and creative individuals, like myself, have been drawn towards string theory and complexity theory.
Concepts of emergence and intelligent design now inhabit traditionally humanistic realms, multi-modal and interdisciplinary research fields merge and encourage a curiously productive cross pollination of ideas. Which all sounds terribly waffly I know, tell you what why don't I just show you this video I only recently discovered from Oisin Prendiville and Michael Higgins
Posted by Unknown at 3:35 PM No comments: